On the very top of the historical town complex, on 470 m of altitude, Hrvoje Vukčić Hrvatinić built fortress. There was already a roman settlement on that location and many historical layers on the wider Jajce area. These facts are confired in the works of prominent archelogists, historians and writers Ćiro Truhelka and Đuro Basler. 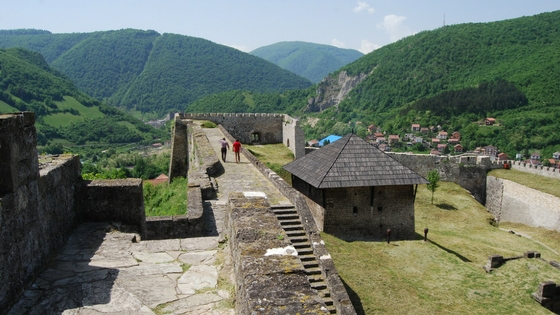 View to the Fortress 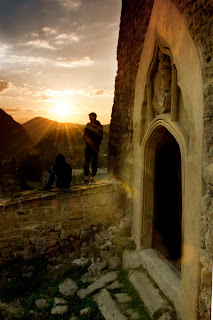 The oldest written document dates from that period (1396.), mentioning Hrvoje Vukčić Hrvatinić as "Conte di Jajcze" - Duke of Jajce. Apart from main defensive walls on Fortress, two additional walls have been built, on the west and north side, descending to rivers Pliva and Vrbas.
Inside the Fortress ramparts, traces of a castle have been found, based on their caracteristics probably built after Hrvoje died, during the period of Stjepan Tomaš, who moved the royal residence from Bobovac (near Kakanj) to Jajce. Defensive structures  of Jajce old town, mostly kept until today, have been reconstructed during 15th and first decades of 16th century.

Last bosnian king, Stjepan Tomašević, was crowned in Jajce, in year 1461, in St. Mary's Church. Based on sultan Mehmed II Fatih's order, he was captured in Ključ (town in Bosnia) and decapitated in Jajce in 1463. This was the end of centuries old bosnian independet kingdom.

Croatian and Hungarian king, Matthias Corvin took over Jajce from Ottomans and formed autonomus area Jajce, which was a strategic base for Hungarians until 1527. After the Mohacs Battle, Jajce came under control of Ottomans until 1878, when Autro-Hungarian monarhy took over the government. Above  the original entrance to fortress, in 15th century a royal coat of arms was carved into the wall and this is the only preserved coat of arms of Bosnian royal family Kotromanić. The coat of armes stayed untouched due to the fact  that Ottomans in 16th century built another entrance to Fortress, adding extra stones blocks on the wall as an reinforcment.

Inside of the Fortress is water source. That is a natural phenomenon because Fortress is the highest point of the rock on which medieval town has been built. Austro-Hungarians used the existing water source and built a water reservoir which is still used today to supply with water part of town near to Fortress.

Many visitors are interested in origin of the town's name "Jajce" (small egg). Earlier in the section "Underground Church/Catacombs" we mentioned that Hrvoje Vukčić Hrvatinić was in friendly and good relationship with king of Naples Ladislav. Due to that Hrvoje ordered the concruction of town similar to "Castel dell'Ovo" in Napoli (egg fortress), so this could be the explanation of how Jajce got its name.

Ascent to Fortress is steepy but short. During the climbing you will see different parts of Fortress:  towers, gates, walls and bastions. 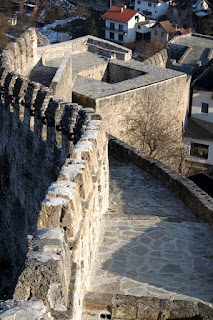 The system of town fortification and defensive walls was constructed in several phases. Two complete ramparts extend from the north and west side of the Fortress. On the north rampart Šamić tower is built, providing view on town entrance from Vrbas river, Small and Big tower were built later, during the Ottoman period.

Clock tower is adapted medieval watch tower with dominant position. It is upper part of medieval town. It was adopted by Ottomans and the clock mehanism was added.

Papaz tower is situated beside the Banja Luka or north gate. The position of this tower had an important defensive system, which is why it was reinforced and reconstructed few times. Apart from reconstruction, it has kept original form of defensive walls and it represents the typical shape of a medieval tower.

Bear tower got its name, as assumed, due to its shape firmness and size. It is situated on the west rampart. The amplitude of this tower is 50 m, and the walls are 4,5 - 6 m thick.

Travnik and Banja Luka gate are part of medieval defensive walls, on the north and west side of the town. Gates are composed of the gate (entrance) and towers.

In order to accomplish that, political body called Antifascist council of national liberation of Yugoslavia (abr. AVNOJ) was established. D... 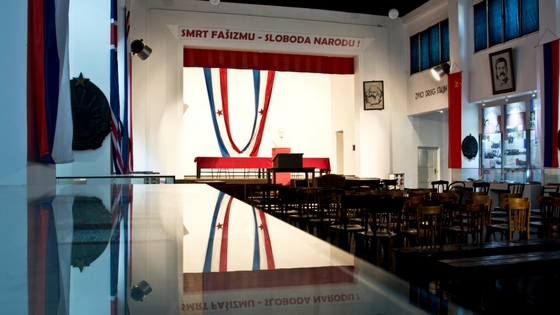